a community of faith, leading people to Christ
Menu

The Reverend Mark A. Werner serves as Pastor of Emanuel
Lutheran Church, Elmer, New Jersey since July 1, 2019. Ordained in 1998, Pastor
Mark as he prefers to be called, served congregations in Orrstown Parish,
Abbottstown and Latrobe (Trauger) Pennsylvania.

While in the Lower Susquehanna Synod, ELCA, he served in a
variety of ways.  As a member of the
Synod’s Evangelism and Outreach Committee, Pastor Mark helped develop the
Synod’s Mission Plan.  He served as a
Mission Consultant, helping congregations develop their mission statements and
plans.  He was the secretary of the
Hanover Conference from 2003-2005 before being elected Dean of the Conference
in 2005.  Pastor Mark also served as
Chair of the Committee of Deans in 2006.

From 2010 until 2013, Pastor Mark served on the Steering
Committee for West Penn Lutheran CORE.  Along
with St. Paul’s, he joined the North American Lutheran Church in July
2011.

Since joining the NALC, Mark served in a variety of
capacities beyond the congregation. Pastor Mark was a member and recording
secretary of the Mid-Northeast Mission District Council. He currently serves on
the NALC Disaster Task force, is a member of the board for Sola Publishing and
a Mission Connector through the NALC Great Commission Society.

Mark and his wife, Amy celebrated their 25th
wedding anniversary this year. She has served on both the National and Mission
District WNALC boards. Additionally, she has planned a variety of trips for
women to hear inspiring speakers of faith.

Mark and Amy have one son, Jordan. He is working on becoming
an Eagle Scout. Jordan plays the trumpet and has his red belt in Taekwondo.

Among Mark’s hobbies are cooking, gardening and
reading. He is a very passionate Philadelphia sports fan. 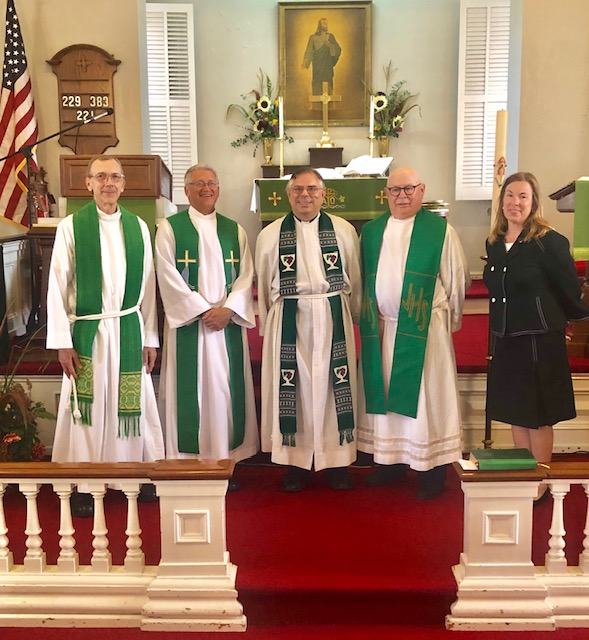